Following its crash in Utah, CN7 was rebuilt in 1962, with modifications including differential locks and a large vertical stabilising fin. After initial trials at Goodwood and further modifications to the very strong fibre-glass cockpit canopy, CN7 was shipped this time to Australia for a new attempt at Lake Eyre in 1963.

The Lake Eyre location was chosen as it offered 450 square miles (1,170 km2) of dried salt lake, where rain had not fallen in the previous 20 years, and the surface of the 20 miles (32 km) long track was as hard as concrete. As Campbell arrived in late March, with a view to a May attempt, the first light rain fell.

Campbell and Bluebird were running by early May but once again more rain fell, and low-speed test runs could not progress into the higher speed ranges. By late May, the rain became torrential, and the lake was flooded. Campbell had to move the CN7 off the lake in the middle of the night to save the car from being submerged by the rising flood waters. The 1963 attempt was over. Campbell received very bad press following the failure to set a new record, but the weather conditions had made an attempt out of the question. BP pulled out as a sponsor at the end of the year.

Campbell and his team returned to Lake Eyre in 1964, with sponsorship from Australian oil company Ampol, but the salt surface never returned to the promise it had held in 1962 and Campbell had to battle with CN7 to reach record speeds (over 400 mph/640 km/h). After more light rain in June, the lake finally began to dry enough for an attempt to be made.

Donald Campbell became the first man to break the world land and water speed records in the same year. He reached an average speed of 276.33mph (444.71km/h) in his speedboat, Bluebird, on Lake Dumbleyung in Perth, Western Australia.

I never thought we had the chance of a snowball on the desert of cracking it today.

He had been trying to realise his record-breaking attempt for months at various locations in Australia. Each time he has been frustrated. The weather at his first choice of location, Lake Bonney in South Australia, proved too unpredictable.

Then, he moved to Lake Dumbleyung, near Perth, on 16 December, only to be delayed by wild ducks, which could not fly away because they were moulting. Again, the weather was the next setback, as persistent easterly winds raised waves up to 2ft (61cm) high, making any attempt impossible.

With time running out for him to achieve his goal of breaking both speed records in the same year, he began considering a move to a third lake just south of Perth. Then suddenly, on the last possible day, the winds eased and the lake became flat calm.

Conditions were rated 95% suitable, and the chief mechanic, Leo Villa, radioed to Donald:

Several hundred people gathered on the shores of the lake to watch, among them his third wife, Tonia Bern.

When she heard that he had done it, she dived into the lake and swam out to embrace him as he brought Bluebird in.

As he stepped ashore, Donald told his supporters:

“It’s amazing that we clinched it. I never thought we had the chance of a snowball on the desert of cracking it today.”

Donald broke the land speed record in July on Lake Eyre salt flat in central Australia, with a speed of 403.1mph (648.72km/h).

Had the salt surface been hard and dry, and the full 15 mile length originally envisaged, there can be no doubt that CN7 would have set a record well in excess of 450 mph (720 km/h) and perhaps close to her design maximum of 500 mph (800 km/h), a speed that no other wheel driven car had approached.

However, the record was short-lived: on 27 October an American, Art Arfon, drove his jet car across Bonneville Salt Flats in Utah at an average speed of 536.71mph (863.75km/h).

Nevertheless, Donald commissioned the author John Pearson to chronicle this attempt, with the resultant critically acclaimed book Bluebird and the Dead Lake, published by Collins in 1965.

To celebrate the record, Donald drove CN7 through the streets of the South Australian capital, Adelaide, to a presentation at city hall before a crowd of in excess of 200,000 people. CN7 was then displayed widely in Australia and the UK, after her return in November 1964. She undoubtedly remains one of the most iconic designs of the 20th century. 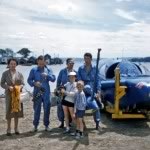 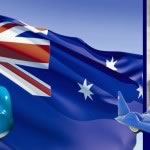