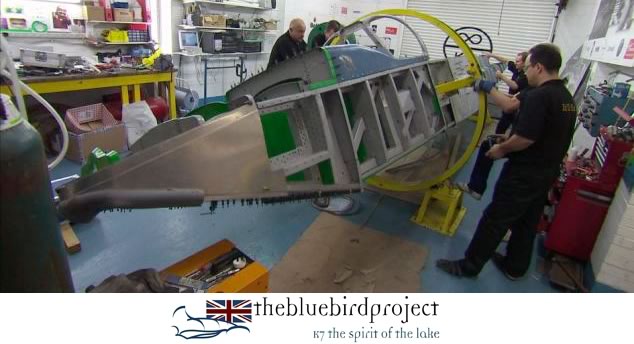 A small, yet remarkable, team of diving enthusiasts and volunteer engineers is putting Bluebird K7 back together, using 90 per cent of her original parts and fabric – even removing, and then replacing, thousands of individual rivets. Bill Smith, who salvaged Bluebird in 2001, is leading the restoration project from his workshop in North Shields on Tyneside.

Back onto Coniston Water

Bluebird will be rebuilt to full running condition and will undergo a series of proving trials on Consiston Water, hopefully in late 2012, although no fixed date is set. In other words, she will once again be fully operational. It is intended that an experienced and skilled hydroplane pilot will complete a 100mph run on the lake itself.

The Lake District National Park Authority has already given permission for the proving trials to exceed the speed limit on Coniston Water. Her engine is being de-rated, so she will no longer be capable of record breaking speeds.

After the trials, Bluebird K7 will go on permanent display in the new Campbell Wing of The Ruskin Museum in Coniston. The museum and the K7 restoration project are separate endeavours, both funded independently. The rebuild programme relies on sponsorship from industry, either in the form of materials or services.

Cash donations from Campbell enthusiasts, plus the sale of merchandise, are the project’s only income stream. The project has no paid employees, thus all monies raised go directly into the rebuild. Needless to say, the restoration is a labour of love. Donations are much welcome.

You can donate to The Bluebird Project website, view an amazing gallery of photos and follow Bill’s news on the rebuild of Bluebird K7.