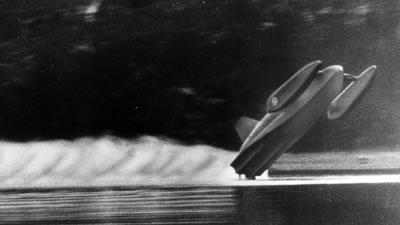 A few frames of grainy film footage show the cartwheeling last few seconds of Donald Campbell and K7 on Coniston Water.  Anyone who lived through the 1960s will recall the images only too well, as the free-wheeling Bluebird was a front page and newsreel headliner, writes web editor, Michele Andrew.

Donald Campbell’s death on 4th January 1967 has become an unforgettable date. Just as people remember where they were when JF Kennedy was assasinated, or when John Lennon was shot, the media coverage surrounding Donald Campbell’s death has imprinted images of the airbourne K7 in the minds of many people who are now in their fifties and beyond.

For younger generations, some 2,000 You-Tube videos of K7’s fatal crash replay history in the intimacy of home web browsing. Until 2001 Donald Campbell’s death was academic, however lengthy the speculation as to why K7 had crashed. From ludicrous suicide theories, to absurd notions of Campbell having swum ashore to lead a new life, speculation germinated for one reason alone. Donald Campbell’s body was never been found.

Despite the valiant efforts of the Royal Navy divers brought to the crash site, it was impossible to find any trace of Donald in the murky water. With modern underwater location equipment this strikes a contemporary audience as strange. Yet, despite the development of sonar, in 1967 it was impossible to find Donald’s body in the lake. This always struck me as curious. Yet it seemed vulgar and insensitive to ask Gina why her father’s body was never found.

Plucking up my courage to ask her one day, I found Gina to be thankfully matter-of -fact about the subject. “You just couldn’t see your hand in front of your face down there, in the silt-churned water,” she explained. “The naval divers went down and they could see parts of Bluebird, but they couldn’t find my father. They certainly looked. They must have been very close to him as it transpires. It was a thirty-four year wait until he was found.”

Thirty four years of rumour and instrusive theorising. How did the family cope with such insensitivities? “By viewing the nonsense as nonsense,” Gina explains. “Neil Sheppard’s explanation of the accident finally dispells insane accusations that my father deliberately crashed. Any suggestion of suicide was always out of the question. Now that we have a scientific analysis of why Bluebird could never have remained on a stable course at such a speed, there is irrefutable proof to silence the rumours. This suggestion of suicide has been put to me for over three decades; it’s a huge relief to now be able to say ‘you’re wrong about that and here’s why’,” adds Gina.

In 1997 the underwater surveyor, Bill Smith, contacted the Campbell family to tell them he intended finding the wreck of K7 and photographing the remains of Bluebird. Unsurprisngly, he received a mixed response from family members – some of whom felt that the ghosts should be allowed to rest at the bottom of the lake.

Employing modern underwater sonar to scan the murky lake, Bill Smith located the main body of the boat in August 2000. Remotely Operated Vehicles (ROVs) were sent down to video wreck site and to survey the debris. (Depicted above, in a detail from Arthur Benjamins’ stunning painting, “Patience.”) By chance, the BBC was filming in the area and soon diverted attention to the underwater discovery. Knowing a good story when it saw one, the BBC went on to broadcast re-enacted scenes of the discovery and hence awaken public interest.

With the media glare focused upon Coniston Water, the threat of divers plundering the wreck loomed large. Determind to save Bluebird from being pillaged, Bill Smith and team entered into negotiation with the Campbell family to discuss raising the wreck. Opinions were divided. Gina’s step-mother Tonia was vehemently keen to let Bluebird lie where she sank. She was not alone in repeating Donald Campbell’s own belief: “The Craft Stays with the Skipper.”

Nevertheless, the operation to recover the craft began on March 2nd 2001.  Finally on 8th March 2001, the seventh day of the operation, the tail fin of Bluebird broke the surface of Coniston Water, followed by the silhouette of the mangled  hull.

The Bluebird Project chronicles the salvage in its mesmerising on-line diary: “Today, the Bluebird team successfully raised the wreck of Bluebird to the surface of Coniston water and hauled her out of the water. Last night was her final one spent in the dark waters of Coniston. Due to increasing fears about hoards of people descending on the Lake District in the midst of a foot and mouth crisis, the team were asked to speed up the operation and recover the wreck as discreetly as possible…” 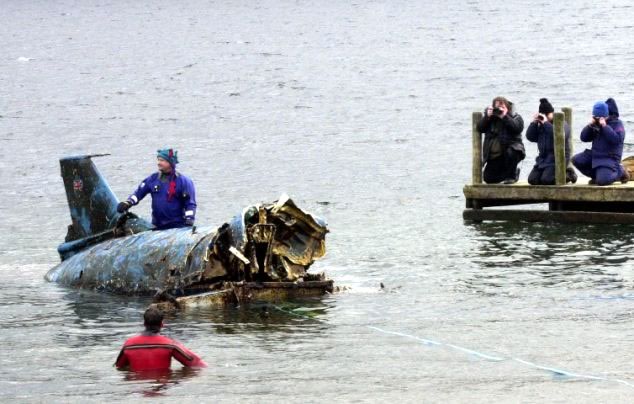 With Bluebird suspended above the water’s surface and with Bill Smith atop, the boat was towed back to the lake’s north shore. As the Bluebird Project diary explains: “Our recovery trailer took a bit of manoeuvring into position and Bluebird’s front end eventually had to be helped up using the crane. While Sal Cartwright tussled single handed with the back end of the wreck, Ian Taylor attached a chain pull to the front of the wreck and winched Bluebird onto her cradle. Beanie and Carl struggled around with the front bags until she was in position. Finally, the bags were deflated, removed from the wreck and a Land Rover on the beach started winching. Bill stood on the port side deck holding the tail fin as Bluebird came out of the lake.”

With the silt hosed out, the boat was put onto a trailer to begin the journey across the Lakes and Dales to Bill Smith’s workshops in the North East. This is where her new journey begins: The Bluebird Project, a meticulous restoration project, is currently underway and is still seeking donations to assist with the work. The aim is to bring the restored Bluebird back to Coniston in Cumbria, where she will go on permanent display in the Bluebird Wing of The Ruskin Museum.

Finding Bluebird is, of course, only half of the story. Another ghostly find lay deep beneath the heavy pull of Coniston Water. When Gina heard that her father had finally been found, a new swell of emotion came crashing into her life. The recovery of Donald’s remains finally allowed Gina and family to hold a burial and service of prayer and thanksgiving. This was held on 12th September 2001 at St. Andrew’s Church in Coniston. Donald’s headstone is much visited by those who come to reflect upon his achievements and ultimate sacrifice.