Gina Campbell has been awarded The Queen’s Service Order an honour established by Queen Elizabeth II which is given by the government of New Zealand. It is awarded: “for valuable voluntary service to the community, or meritorious and faithful services to the Crown, or similar services within the public sector, whether in elected or appointed office”.

Gina was awarded her QSO in June 1990 by The Queen, for the work she did for the community in New Zealand in promoting safety on the water.

When receiving the honour, Her Majesty remarked: “It is such a pleasure to have given three generations of Campbells an honour, especially an honour from New Zealand, which is so dear to my heart.”

Recipients of this award are entitled to use the post-nominal letters “QSO” (which explains this website’s domain name!) and are styled “companion”.

The insignia of the order is a stylised manuka flower with five petals, which contains the effigy of the reigning monarch, surrounded by a red circle inscribed FOR SERVICE — MŌ NGA MAHI NUI, crowned at the top. The ribbon has a traditional Māori Poutama motif of black, white and red diagonal ‘steps’ (signifying the growth of man, striving ever upwards) in the centre, with red stripes along each edge of the ribbon. The insignia is worn on the left lapel of the coat, or from a ribbon tied in a bow at the left shoulder.

Needless to say, the medal is amongst Gina’s most prized possessions. 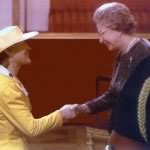 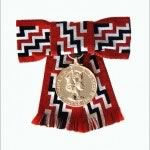