Bluebird K7 was a turbo jet-engined hydroplane in which Donald Campbell set seven world water speed records during the 1950s and 1960s. Tragically, Donald Campbell lost his life in K7 on January 4, 1967 whilst making a bid to raise the speed record to over 300 miles per hour (480 km/h) on Coniston Water in the English Lake District.

K7 was born from necessity. Donald had been using his father Sir Malcolm Campbell’s propellor-driven hydroplane Bluebird K4 for his record breaking attempts, but in 1951 it was destroyed by structural failure, when its gearbox sheared its mountings, and punched through the floor of the hull.

Following rival racer John Cobb’s death in Crusader in 1952, Donald began development of his own all metal jet-powered Bluebird K7 to challenge the record held by the American hydroplane Slo-Mo-Shun IV.

Designed by Ken and Lew Norris, the K7 was a steel-construction, three-point hydroplane with a Metropolitan-Vickers Beryl axial-flow turbojet engine, producing 3500 pound-force (16 kN) of thrust. Like Slo-Mo-Shun, but unlike Cobb’s tricycle Crusader, the three points were arranged in “pickle-fork” layout, prompting Bluebird’s early comparison to a blue lobster. Highly complex in design, it remained the only successful jet-boat until well into the 1960s.

The name “K7” was derived from its Lloyd’s unlimited rating registration. It was carried on a prominent circular badge on its sponsons, underneath an infinity symbol.

Subsequently, four new marks were registered on Coniston Water, where Campbell and Bluebird became an annual fixture in the later half of the fifties, attracting sponsorship from the Mobil oil company and then from BP. There was also an unsuccessful attempt in 1957 at Canandaigua in New York state in the summer of 1957, which failed due to lack of suitable water conditions.

Bluebird K7 was much photographed; as well as her annual Coniston appearances, she was displayed extensively in the UK, USA, Canada and Europe, and then subsequently in Australia during Campbell’s prolonged attempt on the land speed record (LSR) in 1963 – 64.

K7 was fitted with a lighter and more powerful Bristol Siddeley Orpheus engine, taken from a Folland Gnat jet aircraft, and lent to the project by the MOD, which developed 4,500 pound-force (20 kN) of thrust.

The new K7 had a vertical stabiliser (also from a Gnat which Donald Campbell had purchased ) and a new hydraulic water brake designed to slow the boat down on the five-mile Coniston course. The boat returned to Coniston for trials in November 1966.

These did not go well; the weather was appalling and K7 destroyed her engine when the air intakes collapsed under the demands of the more powerful engine, and debris was drawn into the compressor blades. The engine was replaced, Campbell using the unit from the scrapped, crash-damaged Gnat aircraft that he had purchased at the project’s start.The original engine remained outside the team’s lakeside workshop for the rest of the project, shrouded in a tarpaulin.

By the end of November, after further modifications to alter K7’s weight distribution, some high-speed runs were made, but these were timed at well below the existing record. Problems with the fuel system meant that the engine could not develop maximum power. By the middle of December, Campbell had made a number of timed attempts, but the highest speed achieved was 264 mph, and therefore still shy of the existing record. Eventually, further modifications to K7’s fuel system (involving the fitting of a booster pump) fixed the fuel-starvation problem. It was now the end of December and Campbell was all set to proceed, pending only the arrival of suitable weather conditions. 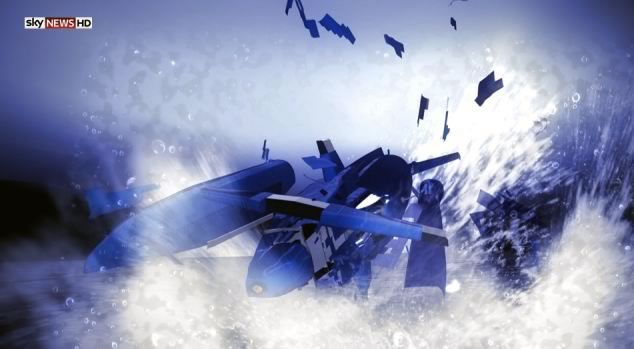 The second run was even faster; as K7 passed the start of the measured kilometre, she was travelling at over 320 mph (510 km/h). However her stability had begun to break down as she travelled at a speed she had never achieved before, and the front of the boat started to bounce out of the water on the starboard side. 150 yards from the end of the measured mile, K7 lifted from the surface and, after about 1.5 seconds, gradually lifted from the water at an ever increasing angle, before she took off at a 90-degree angle to the water’s surface.

She somersaulted and plunged back into the lake, nose first. TV cameras on the banks captured the boat cartwheeling across the water before coming to rest. The impact rent K7 beyond the air intakes (where Donald was sitting) and the main hull sank. Donald Campbell was killed instantly. Mr Whoppit, his teddy mascot, floated to the surface amongst the debris,  as did his pilot’s helmet.

Royal Navy divers quickly made every effort to find and recover his body but, although the wreck of K7 was found, they called off the search after two weeks. It would be many years before Donald’s body was finally found.

Images courtesy of Sky TV from their documentary ‘Bluebird: The Spirit Reborn.” Featured image “Across The Lake” – enamel on canvas by Arthur Benjamins.