Malcolm Campbell set the water speed record four times, his highest speed being 141.740 mph (228.108 km/h) in the Bluebird K4. (He developed and tested Bluebird on Tilgate Lake, Crawley.) He set the record on 19 August 1939 on Coniston Water, England.

Donald Campbell began his own water speed record attempts using his father’s old boat Bluebird K4, but after a structural failure at 170 mph (270 km/h) on Coniston Water, Lancashire in 1951, and the death of John Cobb, who was killed in 1952 trying to break the water speed record, he decided that he would develop a new boat.

Designed by Ken and Lew Norris, the Bluebird K7 was an all-metal jet-propelled 3-point hydroplane with a Metropolitan-Vickers Beryl jet engine producing 3,500 lbf (16 kN) of thrust. (Depicted above in Arthur Benjamins’ painting.) It was unveiled in late 1954 and taken, in January 1955, to Ullswater in the Lake District for its initial trials. After many problems and a number of modifications to K7, Campbell finally succeeded on Ullswater on 23 July 1955, where he set a record of 202.15 mph (324 km/h), beating the previous record by some 24 mph (39 km/h) held by Stanley Sayres.

The name “K7” was derived from its Lloyd’s unlimited rating registration. It was carried in a prominent circular badge on its sponsons, underneath an infinity symbol. You can follow the chronology of the boats on the Timeline created by Gina’s cousin, Sir Malcolm’s grandson, Don Wales. 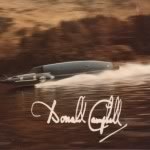 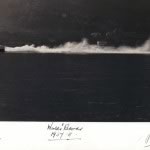 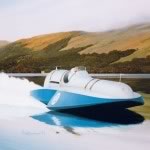 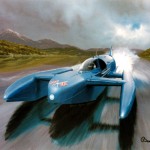